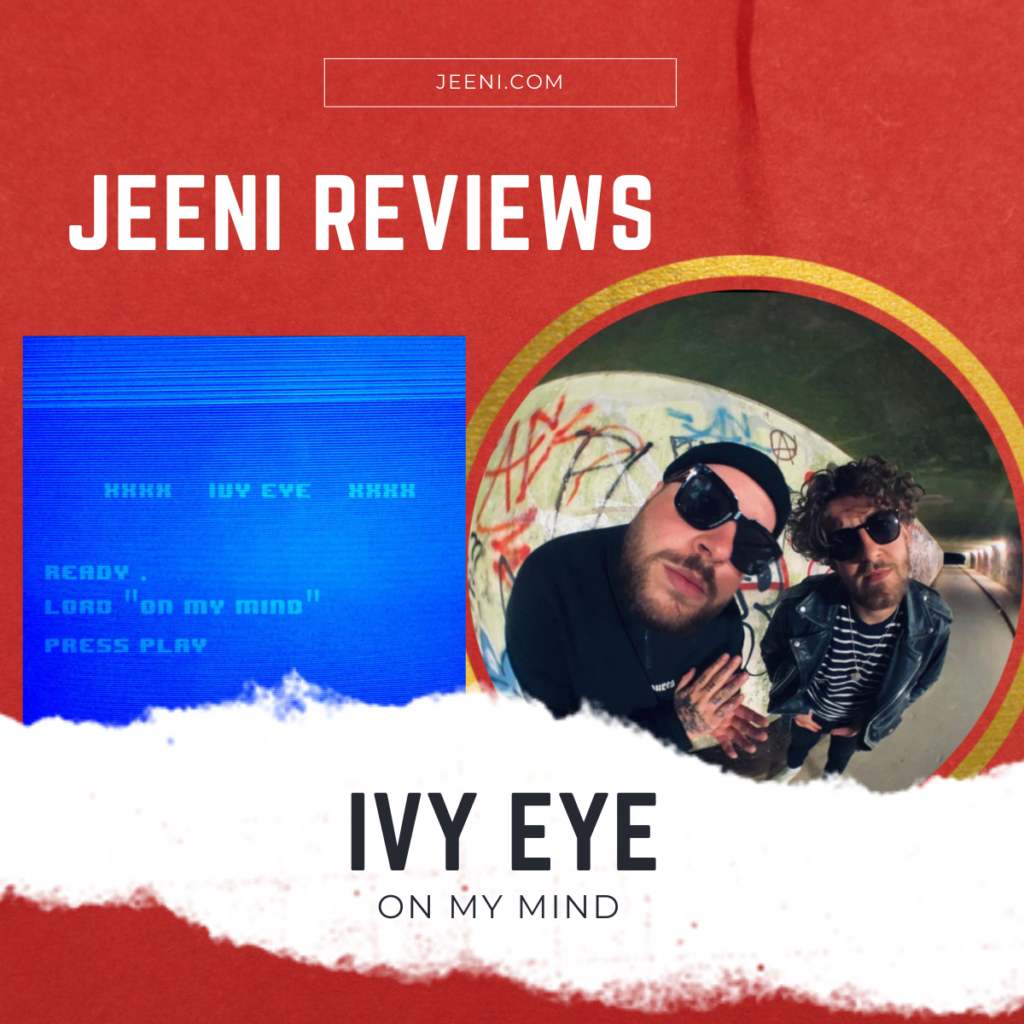 Electronic duo, Ivy Eye makes a formidable case for the wellbeing of disco with their latest revival effort, ‘On My Mind’

In just a short period of electronic anthem creation, UK electronic act, Ivy Eye have steadily been building more and more traction with their disco revival endeavor. Joining the likes of Jessies Ware, Midnight Generation and Róisín Murphy, in the electronic rejuvenation of disco, Ivy Eye have an even more on-the-nose appreciation of the 70s club music. And ‘On My Mind’ is no exception. Consisting of Matthew Benham and Rory Sheppard, Ivy Eye continue to raise the bar of their dance/disco quality with their newest single.

A swirling crescendo opens the track which is met with short, sharp strings, a four-to-the-floor kick-clap beat and a host of synth pads, all joined together as a glittery, shimmering entrance into this electric single. The introductory instrumental takes a rest as the vocals enter for the first verse. A restless synth bass bounces all over the simple, dependable dance beat as various guitar parts stab into the off-beats. Every component of Ivy Eye’s instrumental feels like it’s bursting with energy and personality, almost as though they’re all desperate to be a part of the fun.

After a classic dance riser to elevate the impact and excitement, the first chorus erupts but only for a moment. Almost acting as a teaser for the true chorus, which the twosome still has up their sleeve. This half-chorus is a great way of whetting the listener’s appetite before the main course of funk-dance-disco.

After another verse, the chorus enters in a similar way, except now, most of the instrumental leaves to let the vocals shine to begin with, a classic disco feature. Once the rest of the instruments join in with the celebration, Ivy Eye takes the brave step in picking up where Daft Punk left off with a little help from the vocoder. An iconic sound, made famous by the likes of Stevie Wonder, Peter Frampton and of course, Daft Punk, the vocoder (or similar device, talkbox) manipulates instruments with the help of the performer’s mouth to give the instrument a voice-like quality. This unique and undeniably funky effect is perfect for a song like ‘On My Mind’

The full chorus pay-off delivers in full as the track celebrates in the journey it’s had in the last three minutes. Hinting at the chorus earlier on the track instead of having two main choruses was a stroke of genius and really eases the listen of this disco banger. This perfectly produced track is a promising and exciting sign from an act like Ivy Eye who are so young in their path as artists.

This single acts almost as a love letter to a whole group of styles and eras and Ivy Eye should be applauded for this celebratory triumph of a composition.

Ivy Eye will be performing at Victorious festival this August (26th-28th) get your tickets now and check them out!

JEENI is a multi-channel platform for original entertainment on demand. We’re a direct service between creatives and the global audience.

• We give creatives, independent artists and performers a showcase for their talent and services. And they keep 100% of everything they make.
• We empower our audience and reward them every step of the way.
• We promise to treat our members ethically, fairly, honestly and with respect.
• Access to artist liaison and a supportive marketing team. 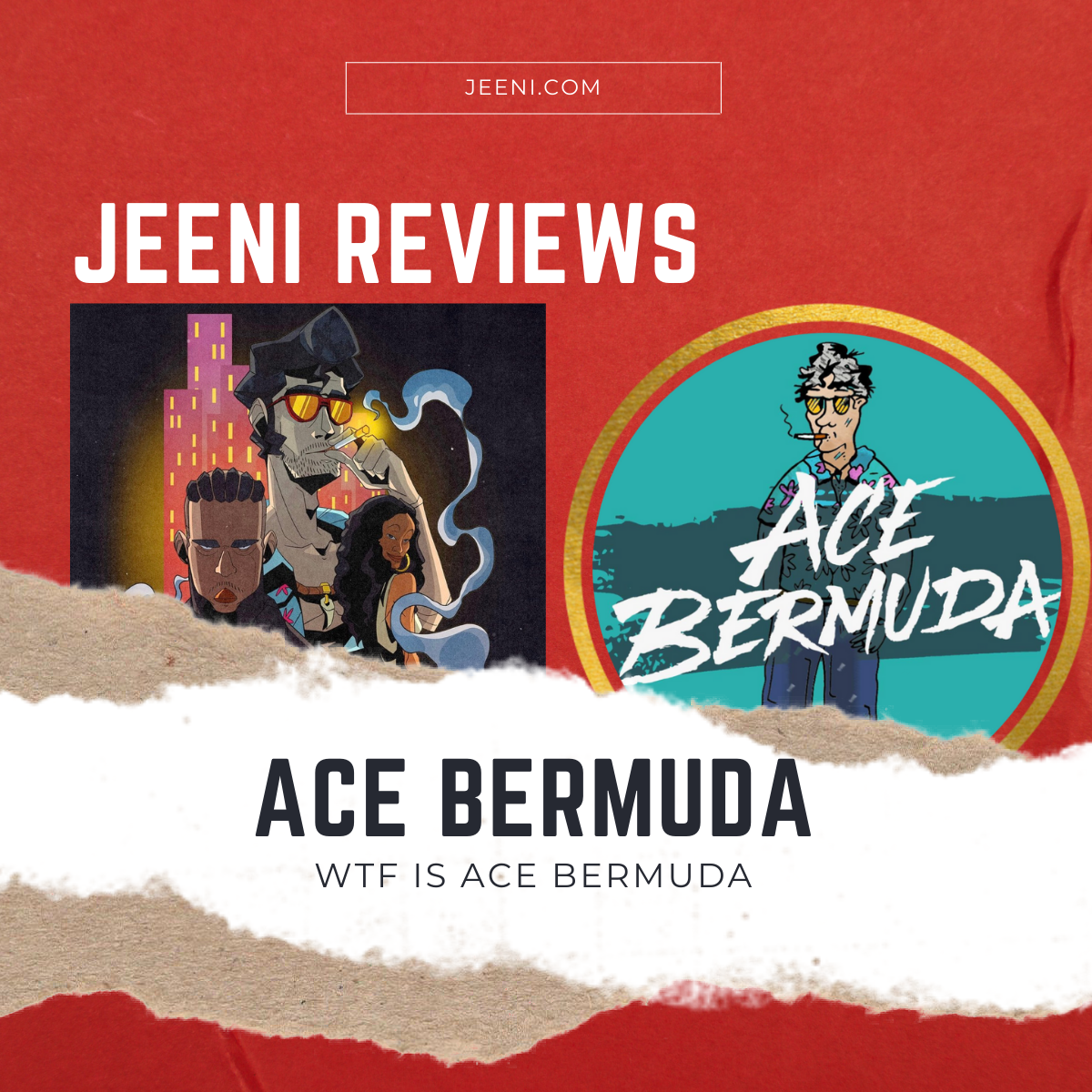 If the elusive, grand and electrifying Ace Bermuda were a TV show, ‘WTF Is Ace Bermuda’ would be their theme song. The collective’s first official release perfectly encapsulates the group’s innovative intentions and collaborative nature.  The first official emergence of Ace Bermuda has been literally years in the making and although they took their sweet time to release a track, the debut has smashed all expectations. Brand new to Jeeni, we’re so lucky to catch this group at the genesis of their refreshing and wild style of alt hip-hop/electronic fusion.  This act consists of a core partnership of Jake Thomas and Jacob Richardson, two evil-genius producers, who work overtime for the chief himself, Mr. Ace Bermuda. The semi-retired industry legend watches from a distance and nods his approval as the two do his creative bidding.  ‘WTF Is Bermuda’ is a living, breathing organism which shifts and morphs around whoever takes to the mic at any given time. Where other electronic based producers might copy and paste chunks of identical audio to flesh out a track, the Bermuda beat-makers give each bar attention, care and detail. Similarly, neither feature steals the show, but instead are balanced and work together incredibly well.   American rapper, Profiiit brings a stone-cold iciness to the middle section of the track. His second verse is accompanied by a harsh, yet distant synth that snakes alongside his un-faltering bars and propels the part even higher. East London’s Jada Freeman sing/raps her smooth, and captivating featured verse as the track begins to peak and wind down. The reverb settings and panning given to her vocalisations brings an ethereality to her voice which adorns the outro with charm and beauty.  A potential reason behind Ace Bermuda's ambiguous sense of identity is also subtly addressed here on the group's debut single, another reason why this track is important to the act's timeline and history. A repeating verse heard at the beginning of the track and throughout, criticises those who value their image above a message that they could be expressing, "Look, another self promoter, spread your face, not your voice". This ideology was infamously held by the late MF DOOM; the masked rapper was known for occasionally sending imposters in his stead at live shows to outline the unimportance of his actual identity. This is an interesting stance in the music industry, which luckily has been continued with acts like Ace Bermuda. Check out Ace Bermuda’s showcase on Jeeni: https://jeeni.com/showcase/AceBermuda/   The Ace Bermuda masterminds have a lot more up their sleeve. Follow the group on socials:  Instagram: https://www.instagram.com/ace.bermuda/   Twitter: https://twitter.com/ace_bermuda  Facebook: https://www.facebook.com/ace.bermuda.927   They also have an upcomming live show with ‘Naytiive’ at Fiddler’s Elbow, Camden on the 12th of February: https://www.ticketweb.uk/event/limited-tickets-naytiive-support-the-fiddlers-elbow-tickets/11537915?pl=hotvox&edpPlParam=%3Fpl%3Dhotvox   How can Jeeni support artists like Ace Bermuda?   JEENI is a multi-channel platform for original entertainment on demand. We’re a direct service between creatives and the global audience.   • We give creatives, independent artists and performers a showcase for their talent and services. And they keep 100% of everything they make.  • We empower our audience and reward them every step of the way.  • We promise to treat our members ethically, fairly, honestly and with respect.  • Access to artist liaison and a supportive marketing team. 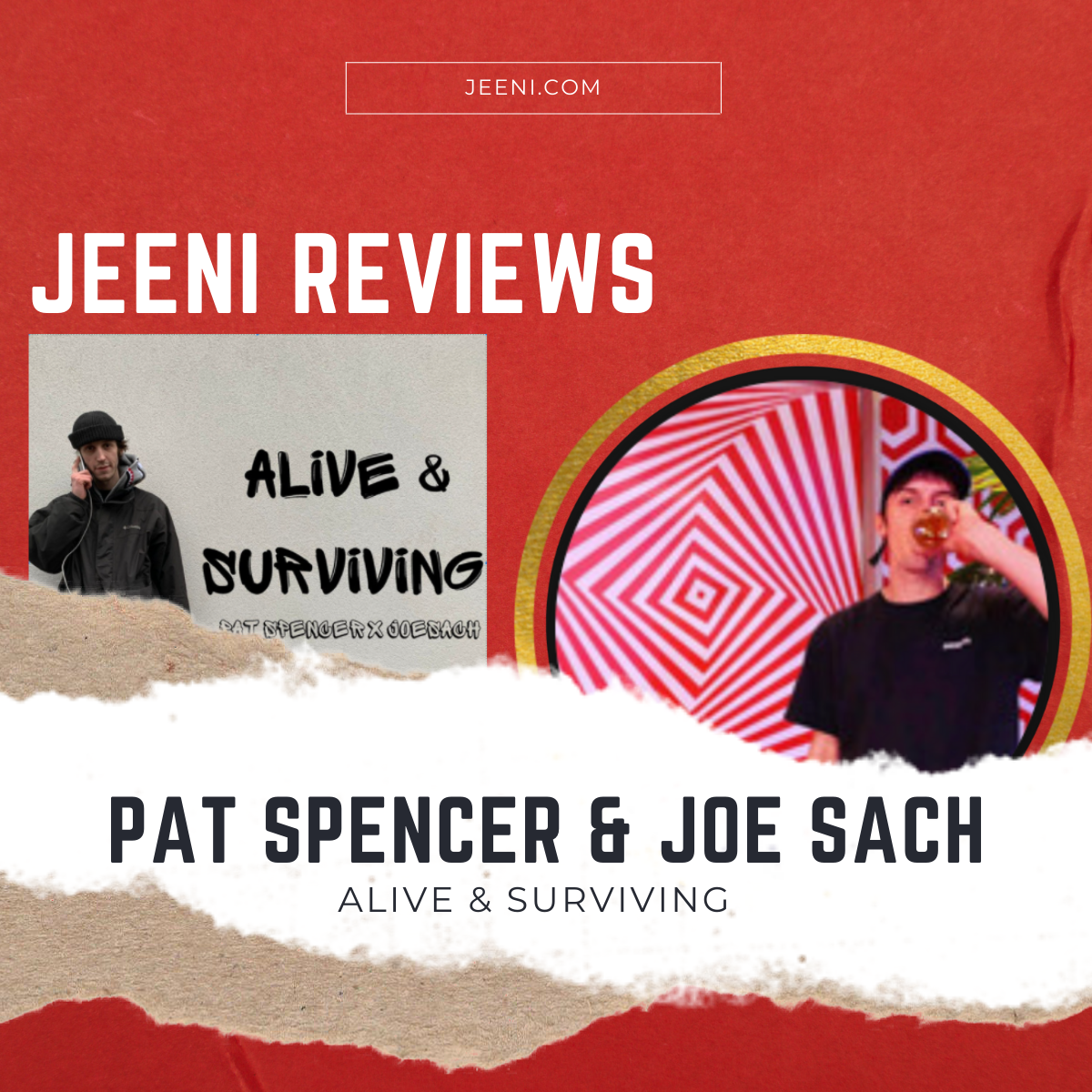 This collaboration between a heart-felt lyricist and a versatile songwriter results in a sweet and layered three-track project.  Although songwriter and producer, JoeSach has already uploaded various electronic tracks on the global streaming platform, Pat Spencer is a new addition to Jeeni and has already broadened Jeeni’s indie channel. Be sure to check out the showcases of these two invaluable jeeni artists: JoeSach - https://jeeni.com/showcase/joesach/ and Pat Spencer - https://jeeni.com/showcase/patspencer/.  Pat Spencer’s sweet lyrics and vocal talent provide the heart to this project, while producer, JoeSach forms the body with day-dreamy and mellow instrumentals. The creative and stylistic change of pace lends itself well to Pat’s voice; with thrashing live drums and angsty bass-centered tracks, Pat’s last year singles were much rowdier and faster paced. His casual, yet sincere vocals contain a lot of character and have been fully realised with these calmer instrumentals.  The opening track, ‘I Like You’ is an excellent introduction to this short project. It swells open with a filter-swept beat and warm electric piano chord as though this EP is warming up. With the softer, jazz inspired instrumentals, Pat’s conversational lyrics and sweet melodies are much more obviously reminiscent of Rex Orange County and the British take on bedroom pop. This light-hearted introduction helps set the initially brighter tone which helps contrast the darker tracks to come.  ‘Time’, the second track, is a retrospective and peaceful cut. Layered, imperfect vocals make the song feel warm, comforting and real. While there’s a certain sadness in Pat’s voice here, there’s also acceptance and optimism as he sings ‘Keep your head down, you’ll be fine’. The particular easiness and comfort in Pat’s vocals on ‘Time’ makes the track a clear highlight.  The final track, poetically named ‘The Persistence of Memory’ is an emotional and longing closer. The final piece of this trilogy feels the bleakest, making the project feel like a gradual decrease in hope and enthusiasm, which is an incredibly effective narrative considering it’s told in just three tracks. Minor keys, moody timbres and morose mixing helps to tell the story of this increasingly blue EP.  How can Jeeni support artists like Pat Spencer?   JEENI is a multi-channel platform for original entertainment on demand. We’re a direct service between creatives and the global audience.   • We give creatives, independent artists and performers a showcase for their talent and services. And they keep 100% of everything they make.  • We empower our audience and reward them every step of the way.  • We promise to treat our members ethically, fairly, honestly and with respect.  • Access to artist liaison and a supportive marketing team.  album review album review album review 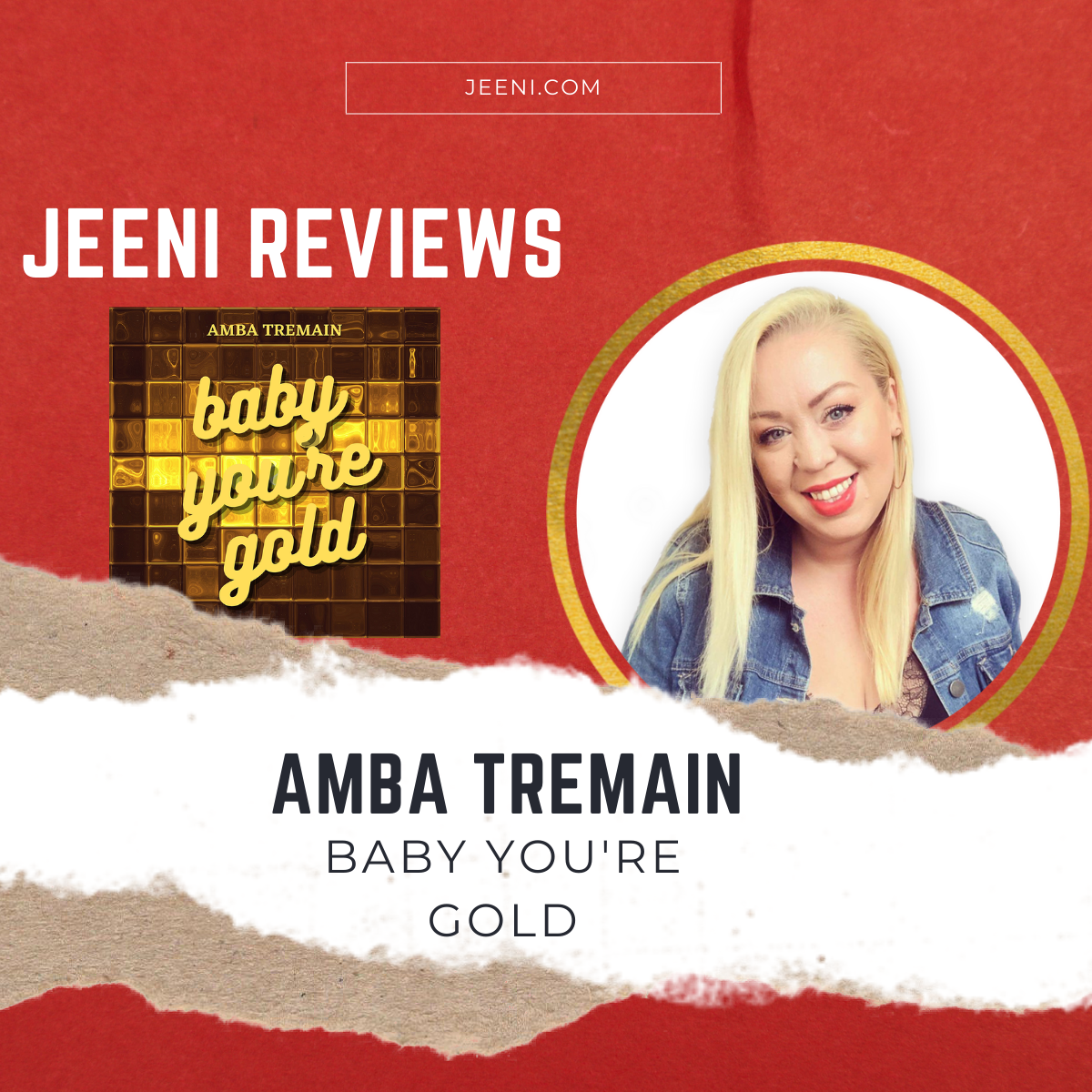 Amba Tremain’s new single ‘Baby You’re Gold’ is a graceful, yet energetic addition to her family of Soulful songs with heavy R&B and Ska influences. Any Amy Winehouse fan would very much enjoy the Soulful, Ska aura of the song, starting with a dreamy intro featuring chords on a Rhodes type electric piano and a classic Ska guitar part on the offbeat. The harmonizing, tremolo backing vocals paint a beautiful vibration in your head.   The chorus features a dramatic build to a loving call and response between Amba and the backing singers. Amba’s voice is a powerful instrument, used here in a tender way through her affectionate lyrics to display a kinder side. The vibrato keys throughout the chorus help synergize the bright, sunny tone, alongside the higher end magical sounding key scales.  A breakdown into a relaxing Ska middle 8 consisting of engaging guitar delay and a smooth bassline prepares you for a last booming chorus. The structurally brilliant song finishes with a sharp, exuberant ending. Amba has certainly got the knack for writing engaging and well written music, here she has grown her range with an undeniably catchy and jubilant song.  Check Out Amba Tremain's BRAND NEW single 'Baby You're Gold' here: https://jeeni.com/amba-tremain-baby-youre-gold/ How can Jeeni support artists like Amba Tremain?   JEENI is a multi-channel platform for original entertainment on demand. We’re a direct service between creatives and the global audience.  • We give creatives, independent artists and performers a showcase for their talent and services. And they keep 100% of everything they make.  • We empower our audience and reward them every step of the way.  • We promise to treat our members ethically, fairly, honestly and with respect.  • Access to artist liaison and a supportive marketing team.  Check out Amba Tremain's Jeeni page: https://jeeni.com/?s=amba+tremain